Came across this graphic in the NY Times showing the recent device patent wars: 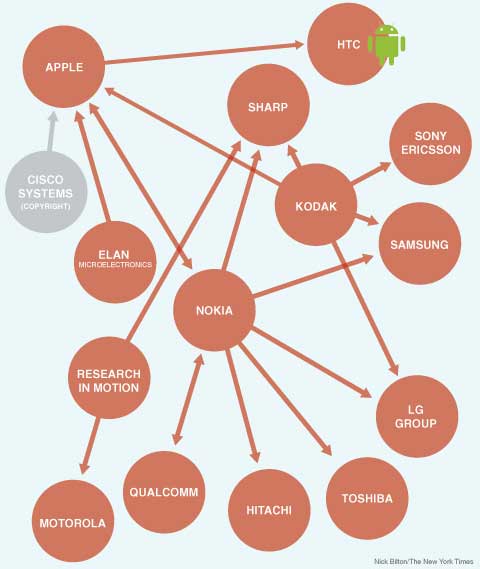 Note, I modified the image and added that Android logo next to HTC 🙂 Also note, that this image doesn’t show all the lawsuits that have been settled (eg Kodak has settled with Motorola). This image also doesn’t show the platform guys, specifically Microsoft and Google.

In any case, looking forward to seeing how this will play out. You have to assume that Google had indemnified HTC for any Android related claim – if you don’t know what I’m talking about, see here. I haven’t looked at any of the patents in question but I imagine a number of them are tied to the Android UX (and maybe the WinMo UX as well). Will Google retaliate by slowing the upgrade cycle of some of their critical apps on iPhone. It’s happening already with Google Maps on Android feeling a generation ahead than the version on iPhone. Obviously, big dollars are at play with rumors of Apple making $100M a year from Google search.

Mobile! View all posts by mobileraj

CEO of Loop Team. I love product. You can email me at raj at rajansingh dot com or follow me @mobileraj